Chic Cap Ferret alone would be enough to satisfy the most discerning beach seeker, but there’s so much more to unwrap. An afternoon wandering the enchanting oyster villages, marvelling at the opulence of Arcachon’s Ville d’Hiver or treating little ones to an afternoon at the aquapark make this a uniquely unforgettable holiday experience. Take in a sunrise from the top of the magnificent Dune du Pilat or add a boat trip around the bay and the routine of normal life will seem far, far away.

Visit our collection of handpicked villas in Cap Ferret and Arcachon Bay to complete your luxury holiday on the Aquitaine Coast.

Read our guide to Cap Ferret & The Arcachon Bay 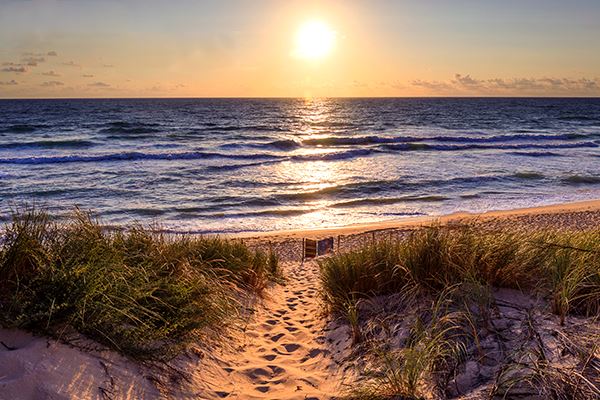 A selection of our holidays in Cap Ferret & The Arcachon Bay 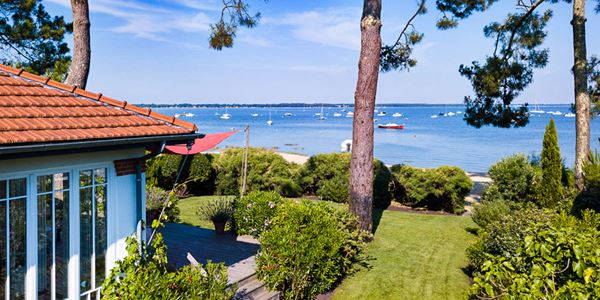 Our guide to Cap Ferret & The Arcachon Bay

The lie of the land

The Cap Ferret Peninsula is the epitome of carefree elegance, from its quaint oyster-farming villages to chic Cap Ferret village – and with all the unspoilt coastlines and fragrant pine forests in between. On its west side, a 22km sweep of pale golden sand catches the tumbling surf of the Atlantic, whilst its east coast, with more inviting beaches to explore, forms one side of the triangular-shaped Bassin d’Arcachon: a large tidal bay famous for its oyster beds. Arcachon swells out into the base of this triangle, a sprawling town that blossomed in the 19th century under the appreciative eye of Napoleon III who fell in love with it. Two wheel transport is by far the best way to get around; there are hire shops everywhere, and the slower pace adds to the wonderfully relaxed feel that pervades the entire area.

Two sides of the sea

At low tide, the Bassin d’Arcachon is reduced to just a quarter of its original volume and, as the waters recede, they reveal an expanse of tranquil sand banks, mud flats and salt meadows, where boats lie quietly slumbering on their sides, migratory sea birds like itinerant dreams floating above them. The beaches around the bassin are perfect for little ones. They have none of the white horses of the Atlantic coast, although even on the peninsula’s wilder side, when the tide goes out, it often leaves shallow lagoons perfect for paddling. And wherever you lay your towel, east or west, the sand is as smooth as silk.

A delicacy that changes everything

Without oysters, the Cap Ferret peninsula could be considered just another upmarket beach destination, but with them, it stands apart. From humble beginnings in the 1860s, the local oyster farms now produce up to 10,000 tonnes a year and villages ostréicoles such as Claouey, L’Herbe and Le Canon grew up to accommodate the farmers, their families – and curious visitors. Their narrow streets invite exploration: tiny wooden cottages sitting shoulder to shoulder, terraces draped with vines and bougainvillea, and, between them, glimpses of blue sea and the spindly wooden stakes marking out the oyster beds. And there are plenty of opportunities for dégustation (tastings) too, with views across the bay.

The City of Four Seasons

Founded by imperial decree in 1857, Arcachon soon became a wellbeing centre for the well-to-do, thanks to its therapeutic, pine-scented air, 7km of lovely beaches (including the much-photographed Pereire) and the glitterati’s new-found fondness for sea swimming – and, as it grew, it evolved into four distinct areas. The aptly named Spring Town is home to the source of Abatilles mineral water and Autumn Town, made up of Saint-Ferdinand and Aiguillon, is best known for yachting and fishing. But it’s La Ville d’Éte (Summer Town) embracing the seafront and newly-rebuilt town centre, and La Ville d’Hiver, an opulent architectural showcase of immaculate villas, that will vie for your attention.

For tots, teens and in betweens

The coast is a playground that starts with sandcastles and vintage carousels and ends with surfing lessons. There are beach clubs too, such as Cap Ferret’s Club Mickey du Phare, with trampolines and supervised fun for ages three to 12. A gentle bike ride through pine forests with a picnic is everything a family holiday should be or rest your legs and take the ‘little trains’ of Cap Ferret and Arcachon. The local tourist offices are excellent with special rates when you book through them, making attractions such as the Zoo du Bassin d’Arcachon, the waterslides of Aqualand or the Bassin Aventures adventure park even more appealing.

Map and other regions 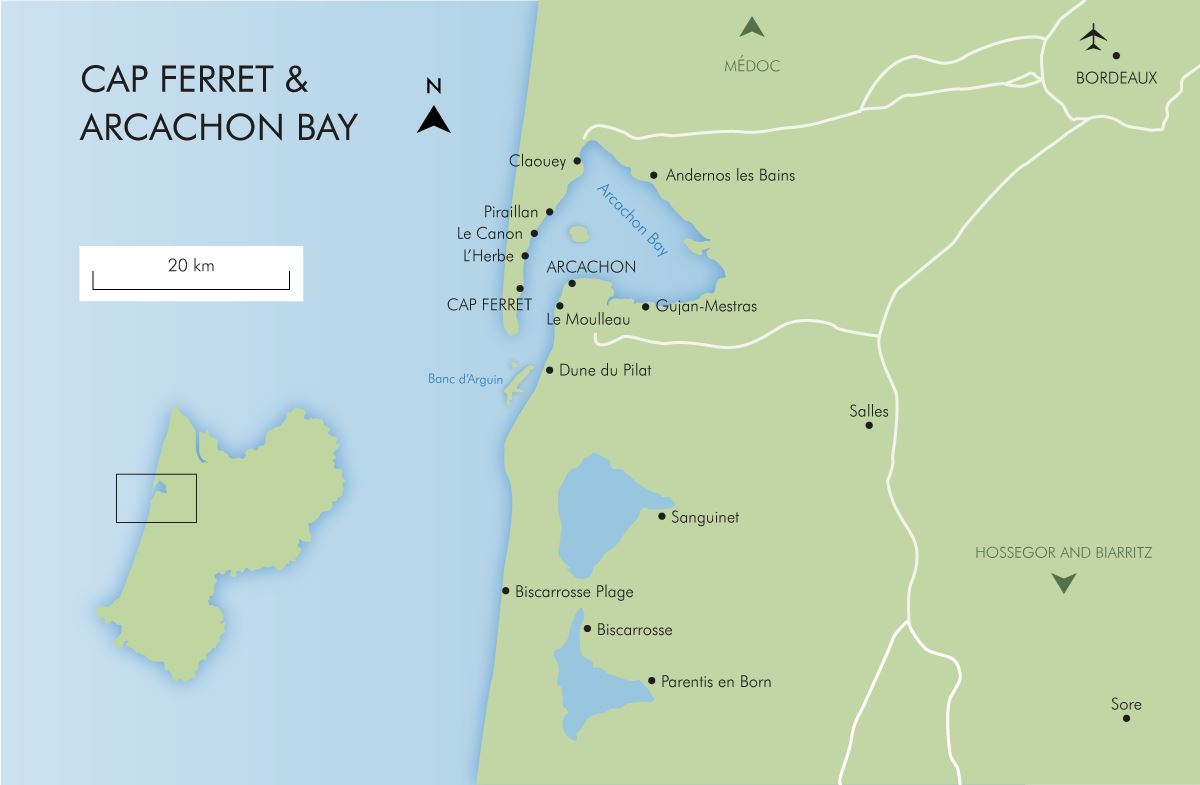 A taste of Cap Ferret

This being France, restaurants can be tourist attractions in their own right, not least Chez Hortense in Cap Ferret and Philippe Starck’s curiously named La Co(o)rniche in Pyla, but there’s no shortage of waterfront venues, sophisticated menus complemented by sea views and informal service. This is a region famous for its seafood – oysters in particular – which you can sample in the cabanes and restaurants of the villages ostréicoles. Piraillan, L’Herbe and Le Canon are among the most well-known, but there are others, including Claouey where the local fishmongers are renowned for offering unpretentious advice.

Cap Ferret has both a chic outdoor market and a fabulous fresh food hall. Loud and lively, it’s an unbeatable place for people-watching as well as shopping, with mouth-watering aromas guiding you round its colourfully chaotic aisles. Stalls selling organic produce pop up in Le Moulleau from the first Tuesday in July to the last in August and in Piraillan and Arcachon, there are covered food markets, Les Halles, brimful of local produce. You can also stop there for coffee or a tasty lunch. And, of course, there are pastries galore: try canelés, traditionally made with the egg yolks left over from the port and wine-making process, or dames blanches, gorgeous little choux pastries with cream, icing sugar & sugar crystals.

Being near Bordeaux, producer of some of the finest wines in the world, brings a certain je ne sais quoi to the wine lists, although you can try wine tasting with a couple of local producers around Arcachon. For oysters, a glass of the local crisp Sauvignon Blanc is a delicious accompaniment, although bubbles are a popular alternative or even stout. If you’re planning to barbecue, grab a bottle or two of clairet rosé: summer in a glass.

For evening drinks with atmosphere, choose one of the lifeguarded beaches on the Atlantic coast which have summer beach shacks serving sundowners – a pleasure for parents in particular who can watch their offspring playing on the sand nearby.

Organised by the Culture Minister, these free open-air concerts at the Cap Ferret lighthouse are an easy way to catch the summer vibe every Saturday and Sunday evening.

What's on in June

The best riders in the country battle it out on the sand with jumping and races at low tide. Visit the town tourist office for details.

Celebrated in 100 countries, this festival began in 1982 and brings together many different genres of music, from jazz and soul to pop and rock.

What's on in July

14 July: Bastille Day commemorates the storming of the Bastille, a turning point in the French Revolution, this public holiday is enthusiastically celebrated across France, with fireworks, music and plenty of food and wine.

Held in Claouey's Place de Bertic, this weekend oyster festival comes with live music and a firework display on the Sunday evening.

In a region inextricably linked to the sea and its maritime traditions, this is a lively event that includes religious ceremonies as well as banquets and fireworks. Take a yellow scarf!

A particularly child-friendly option with beach games, competitions and fairground attractions, as well as music and fireworks as the grand finale. For details, visit the tourist office in Claouey.

What's on in September

Flamenco, hip hop, ballet and contemporary dance performances take to the stage at this annual festival, in various indoor and outdoor venues. Visit www.arcachon.com/festival_cadences.html for details.

Across France every year, around 17,000 monuments and private buildings open their doors to the public. Visit the local tourist office for details and journeesdupatrimoine.culture.gouv.fr

A surfing and bodyboarding competition (the first of the year is held in May) that’s open to everyone and held on Cap Ferret’s Plage de l’Horizon from 9am to 5pm.

A table with a view

Chez Hortense is a Cap Ferret institution – the place for ultra-fresh, perfectly-prepared seafood; accompanied by copious quantities of frites and a little drop of what you fancy. The best chance of a table is a visit at midday. The views across the bay to the Dune du Pilat are to die for and the impeccable table manners of the French children will leave you weeping into your rosé.

In the Arcachon Bay they like to do things a little differently, and for sugary tea-time beach snacks, the locals have a few delicate treats up their sleeve. Macaroons are taken to a new level of colourful artistry, whilst the tiny caramelised custard canelés are utterly exquisite. And for a taste of heaven try the Dunes Blanches unique to Chez Pascal - little clouds of choux pastry, filled with whipped cream and topped with icing sugar and sugar crystals.

Live by the rhythm of the tides

Every 12 hours or so an astonishing 400 to 800 cubic metres of water passes in and out of the Bay of Arcachon. Oyster-farmers go with the flow, allowing tide tables to guide their daily activities and we think living by the rhythm of the tides is the perfect way to plan a day here. On the ocean side, low tide is a time for pottering in the flats, building sandcastles and playing in the tidal pools. Bay-side, high tide is the time for swimming, paddle-boarding and oyster-tasting at a beach-side shack with the water lapping at your feet.

The Bay boasts two Notre Dames, both with breath-taking stained-glass windows yet architecturally entirely different. Arcachon-style Notre Dame des Passes above Le Moulleau gazes over to the modernist masterpiece of Notre Dames des Flots on the opposite shore in Cap Ferret. The Villa Algérienne in l’Herbe is a delight, both for its colourful architecture and its unique story as a place of worship for Christians and Muslims alike.

Life in the Autumn Town

Arcachon is well known for its Ville d’Hiver, a district of ornate late 19th century mansions, while the beaches and seafront restaurants of its summer town, the Ville d’Eté, are never overlooked. But for a taste of local life, head over to the Ville d’Automne and its chief district l’Aiguillon. This charming port-side area, favoured by locals for its boutiques and authentic bistros, is a wonderful spot to enjoy the menus du jour - ridiculously good value for lunch - and afterwards take a stroll around the marina and marvel at the luxurious yachts and cruisers.

Why travel with us..? 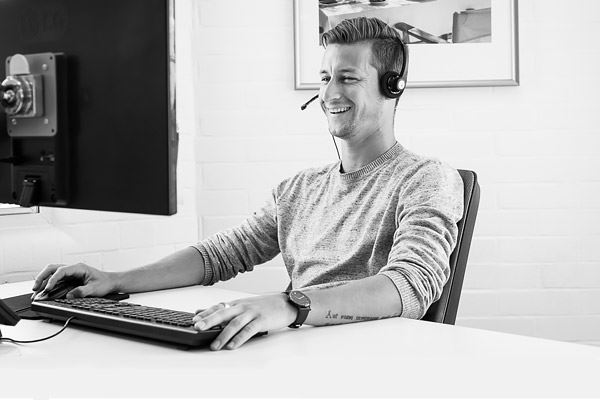 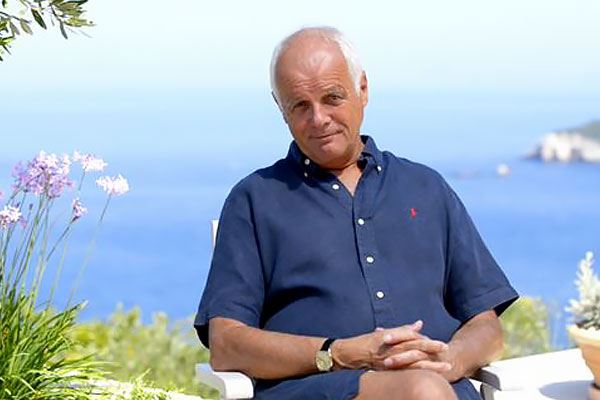 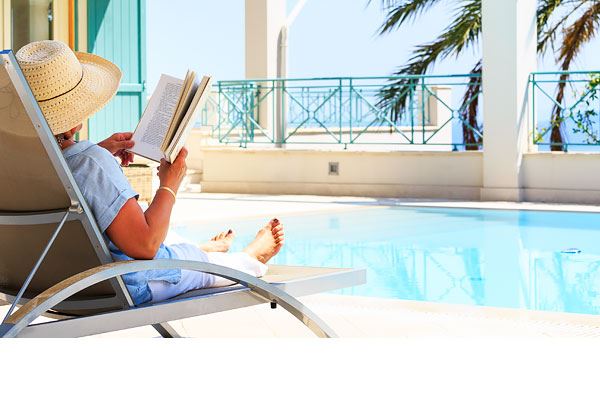